The first picture has emerged of the British father feared to have drowned while saving his son after the boy got into difficulty during a family trip to Lake Garda on Friday.

Sales director Aran Chada, 51, was with his partner Holly Mosley, 39, and their two children – a 14-year old boy and a girl aged seven – on a boat trip to northern Italy.

The family, who live outside Loughborough, Leicestershire, were understood to have just started their holiday which would have included Mr Chada’s birthday on Tuesday, The Times reports.

While on a pleasure boat some 500 metres from the town of Limone, Mr Chada spotted his son struggling in the water and jumped into to rescue him.

An eyewitness said: ‘He managed to get the boy back to the boat, where he was pulled in by his mother, but the man then slipped beneath the surface, perhaps suffering a seizure.’ 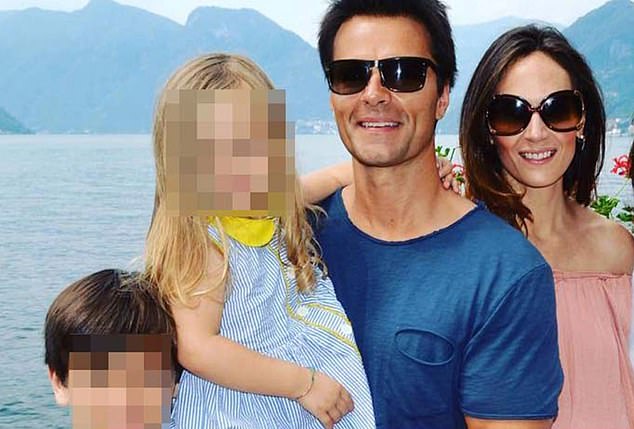 Sales director Aran Chada, 51, was with his partner Holly Mosley, 39, and their two children – a 14-year old boy and a girl aged seven – on a boat trip to northern Italy

Helicopters, rescue boats, divers and a robot submarine were also sent the scour the 300m deep lake, but there has been no trace of Mr Chada yet.

Coastguard commander Antonello Ragadale said: ‘This man was a hero and we fear he drowned, but we’re doing everything we can to find his body.

‘Divers arrived with the helicopters but could do little because a steep, rocky shelf descends to a great depth at that point, so a civil protection agency remote control mini-sub was sent down and searched for the man until late into the night, but to no avail.

Ms Mosley and her children were escorted back to their hotel where they are reportedly being supported by professional counsellors.

According to his LinkedIn page, Mr Chada worked for Global Energy Ventures, a company that services oilfields in Africa.

Commander Ragadale added: ‘The search went on for several hours on Friday until it got dark and started again at first light on Saturday. 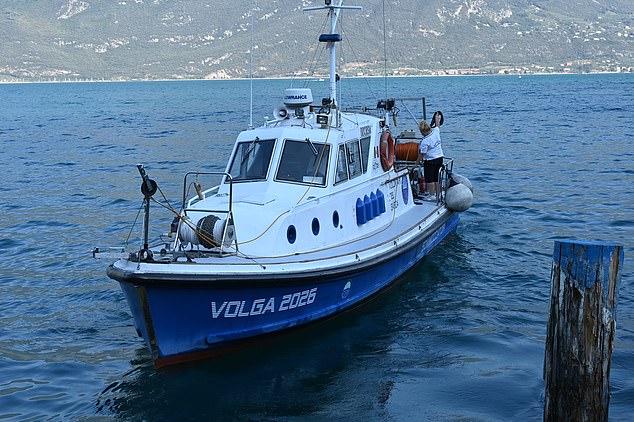 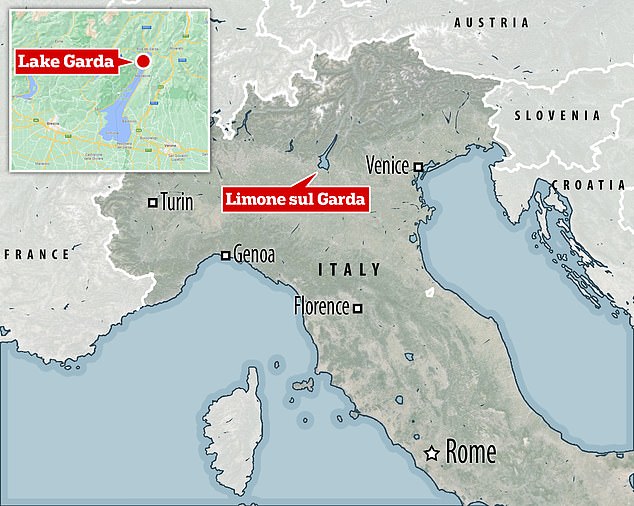 Limone sul Garda, a picturesque lakeside town in northern Italy, was the scene of the accident

‘The weather today is windy so the search is proving difficult but we will press on for as long as it takes so we can give some comfort to the poor woman and her children.

‘The whole family are very upset and have been offered counselling while the search goes on and the British consulate has been informed.

‘The water goes down to more than 200m in some places so we are using divers and underwater robots.

‘The father was very brave in what he did. He saw his child in danger and he did what any parent would do and tried to save them which he did but sadly it would appear that he has lost his life.’

Known for its picturesque setting with dramatic mountains tumbling into the crystal clear lake, the area is a magnet for British holidaymakers and former PM Theresa May, who is a regular visitor and currently staying close by.

An eyewitness told local media: ‘We were about 100m from the shore when we heard a woman screaming for help.

‘I looked over and she was on a boat with two children shouting and pointing to the water so we called the emergency services and they were there very quickly.’

Temperatures at the time of the incident on Friday afternoon were around 38C but the water was considerably colder and officials believe the man may have had a thermal shock seizure.

As well as coastguard units, a firefighting boat and several volunteer vessels were used in the search. A helicopter also scanned the water, which reaches a maximum depth of 300 metres. 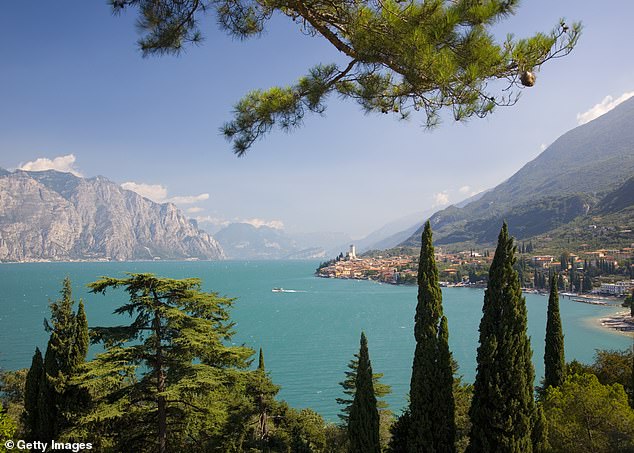 Known for its stunning setting and plunging cliffs, the area is a magnet for British holidayers

A robot camera which can scour the bed of the lake was also brought in and a specialist team of divers deployed.

A coastguard spokesman said: ‘The family has rented a boat from a local company for two and a half hours and were due to return it a little before the accident.

‘The man dived in to save his eldest child who was in difficulty and he managed to push him back towards the boat but he then got into trouble.

‘It was very hot on Friday afternoon but the water was a good ten degrees colder so it’s possible he could have had a seizure due to the thermal shock.

‘The search went on for almost seven hours and stopped when it got dark but has now resumed. The family are in their hotel with police and a psychologist has been offered to them for support.’

The Foreign Office spokesman said: ‘We are supporting the family of a British man who has been reported missing in Italy and are in contact with the Italian police.